(a)    It suggests procedures for obtaining annual data on unlinked passenger trips (UPT) and passenger miles traveled (PMT) for the National Transit Database (NTD) through random sampling according to the requirements in the NTD Reporting Manual.

(c)    When it is possible to obtain annual UPT and PMT data according to the requirements in the Reporting Manual by using other methods not specified in this Sampling Manual, then you may do so.

(a)    Development of sampling plans with two options:

(e)    Figure 10.01 shows how these procedures and options relate to each other. 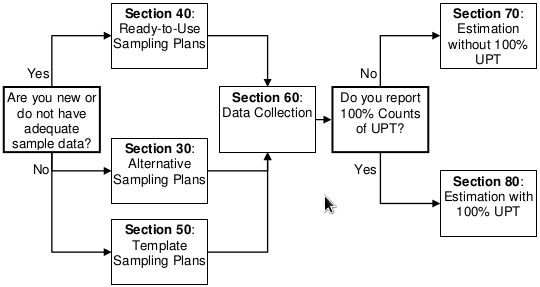 (a)    You may continue using these sampling plans until they are withdrawn.

Auditable record.  Documentation of information collected and processes used in collecting that information that demonstrates your compliance with NTD requirements. Such documentation may also help quality control within your agency when your NTD staff change over time.

First-time reporting.  Reporting of a particular service to the NTD for the first time.

CC.  Cable car – A railway propelled by moving cables located beneath the street. While popular at the turn of the last century, the only surviving system is operated in San Francisco.

CR.  Commuter rail – Rail service operating on either old freight railways, or on tracks that are shared with freight railways, Amtrak, or both. The service is characterized by relatively long distances between stops, for service primarily connecting a central city with outlying suburbs and cities. The service may be either diesel or electric-powered and usually has grade-crossings with roadways.

HR.  Heavy rail – An electric railway that operates local service in exclusive right-of-way. The service is characterized by long trains of six to eight cars or more and by relatively short distances between stops for local service within a city and the immediate suburbs. The Nation’s traditional subway systems are classified as heavy rail.

LR.  Light rail – An electric railway that operates local service in mixed traffic with road vehicles, or has grade crossings with roadways. The service is characterized by short trains of one to four cars and by relatively short distances between stops for local service within a city and the immediate suburbs.

MB.  Bus – Fixed-route bus service is the most-prevalent mode in the country. MB service is powered by a motor and fuel contained within a vehicle. Deviated fixed-route service is also reported as MB.

MG.  Monorail and automated guideway – An electric railway that straddles a single guideway. It may have vehicle operators or may use computers to guide the vehicles.

PB.  Público – Publicos are jitney services operated in Puerto Rico. A transit mode comprising of passenger vans or small buses operating with fixed routes but no fixed schedules. Publicos (PB) are a privately owned and operated public transit service which is market oriented and unsubsidized, but regulated through a public service commission, state or local government. Publicos (PB) are operated under franchise agreements, fares are regulated by route and there are special insurance requirements. Vehicle capacity varies from eight to 24, and the vehicles may be owned or leased by the operator.

RB.  Bus rapid transit – Fixed-route bus systems that either (1) operate their routes predominantly on fixed-guideways (other than on highway high occupancy vehicle (HOV) or shoulder lanes, such as for commuter bus service) or (2) that operate routes of high-frequency service with the following elements: Substantial transit stations, traffic signal priority or preemption, low-floor vehicles or level-platform boarding, and separate branding of the service. High-frequency service is defined as 10-minute peak and 15-minute off-peak headways for at least 14 hours of service operations per day. This mode may include portions of service that are fixed-guideway and non-fixed-guideway.

Use the filter menus below to find parts of the manual that apply specifically to you.